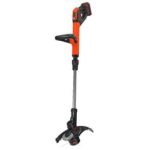 Some of you may not realize this, but “Weed Eater” is actually a brand that sells trimmers and not just a general term for them. And we are not talking about insect weed eaters. Just as many use the term “Band-Aid” when referring to a bandage, homeowners refer to trimmers as “Weed Eaters.”

Just to clear things up before we get into our guide. At GardenConsumers.com, we highlight the best weed eater models from a variety of brands and not just the “Weed Eater” brand. See our Cordless Trimmer page or our Gas Trimmer page. We even have some information on Trimmer Line.

If your goal is to eliminate the unsightly overgrowth of weeds and grass around the edges of your lawn, flowerbeds, pathways, or anywhere else around the home, you are definitely in the right place.

As you can see from our table, many prefer the battery-operated trimmers, but that doesn’t mean they are the best on the market.

You need to weigh out the pros and cons of each style to determine which is the best weed eater for your trimming needs.

The battery-operated units are quite convenient. Just like the gas-powered weed eaters, there is no cord that will limit the distance you can travel or that you have to worry about tripping over as you move.

The downside is that you are limited when it comes to the trimming time. The session will last only as long as the battery has juice in it, and if your trimmer isn’t fully charged, you might not be using it for very long.

We will say, however, that these are some of the quietest models, which is important when you’re trimming in areas where there are certain rules and regulations regarding sound.

Corded weed eaters do not limit you like the battery-operated and gas-powered units do. You can use a corded model for as long as you want (and as far as the cord will reach). You don’t have to worry about the battery dying or running out of gas.

The power supply is always constant! But to be honest, messing with the cord can become troublesome. So, if you find yourself weed-eating often, it is worth it to go with the battery units.

What you won’t like about a corded unit is the cord! It gets in the way as you walk and it can be frustrating when you have to move it around constantly to avoid tripping over it. You will most likely have to purchase an extension cord, as well.

If you have a fairly large yard, this is the least convenient option of them all.

While they may be stinky, noisy, and very demanding in terms of maintenance, the gas-powered weed eater is the most powerful of the three.

If you have a tall brush or thick patches of weeds to whack down, then nothing compares to a gas-powered monster.

Keep in mind that these models will vibrate more than the corded and battery-operated units, which can make your hands numb after an hour of trimming!

Pay Attention to the Small Details as You Shop

Once you have narrowed down a trimmer style, there are still plenty of small details you should take into consideration before you purchase one.

If you’re a newbie, make sure you opt for a trimmer that has an easy string reloading system.

Number 3, for example, has a little lever you can pop down that rests along the edge of the surface you’re trimming, and number 7 has a little wheel that makes it easy for you to roll along a surface and create an even cut.