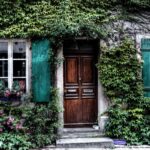 There are many types of ivy (genus: Hendera L.). For many, including me, ivy can induce an almost animal reaction, much like when you unexpectedly come across a snake while hiking. It is one tough cookie.

Many others find it fascinating in how dramatic of a landscape it can create. The house or fence covered in ivy is often used to represent the passage of time and evoke the feeling of oneness with the natural world. I am not one of those people.

Gardeners have often dealt with intrusive ivy as they prepare a new garden. The good news is that if ivy is not present, it does not seem to initiate growth in new areas super easily. It mostly propagates by growing shouts from an already established area. But once, established it can grow at an alarming pace. For example, English Ivy can grow at up to 9′ per year PER vine.

Ivy seems more alive than other plants. It is as if you can see it growing. This can be great if that is what you are looking for, but can quickly become a nuisance as ivy can take over and push out other plants.

If you plan to use an ivy as part of your landscape, you show know that it will require continual care. Unlike other plants which often need care to continue to thrive, ivy will need the continual care to keep from taking over. In the first year or two, ivy may seem like healthy ground covering, but once it gets established watch out. It will want to expand and take over as much area as you let.

Many ivies have become a nuisance in the United States and many are labeled as a noxious weed, like English Ivy. So interesting to me that you can still buy them at many local nurseries, but then find out later that they are near the top of many “bad plant” lists.

Any gardener will probably have some history with ivy. Some may have even used it to dramatic effect in landscapes. There are places and species that could make sense to use, but as a general rule, I just try to avoid Ivy and look for natural alternatives.

If you are willing to take on the continual battle of controlling your ivy, there are some varieties that can be used. At one of my homes in Ohio, when I bought it there was trellis on the side of the front porch with Wisteria growing.

Such a beautify flowering vine. I knew though that it would grow to become a nuisance, but decided to wait and enjoy it for a year. Then another year passed and it had grown out of control and was tearing off my gutters and trying to gain hold of the power line. Not good!

I still loved its smell and super dramatic colors when it bloomed. So, I cut it way back and move the vine off of the porch to a new free standing arbor about 6′ from my house. It took to it. And thrived. But once it was re-established it had no problem jumping back to the house.

In the end, I decided I could not control it and took to remove it completely. This started a multi-year battle to kill the plant. I dug out all the roots, or so I thought, but it came back. I tried using a strong herbicide on the growing plants. That only slowed it down. With a second attempt at digging out the roots, I finally won the battle. But for now, I’m done with ivies and vines.